Major study of “exceptional” water planned – but will it survive “disaster” of aggregate extraction? 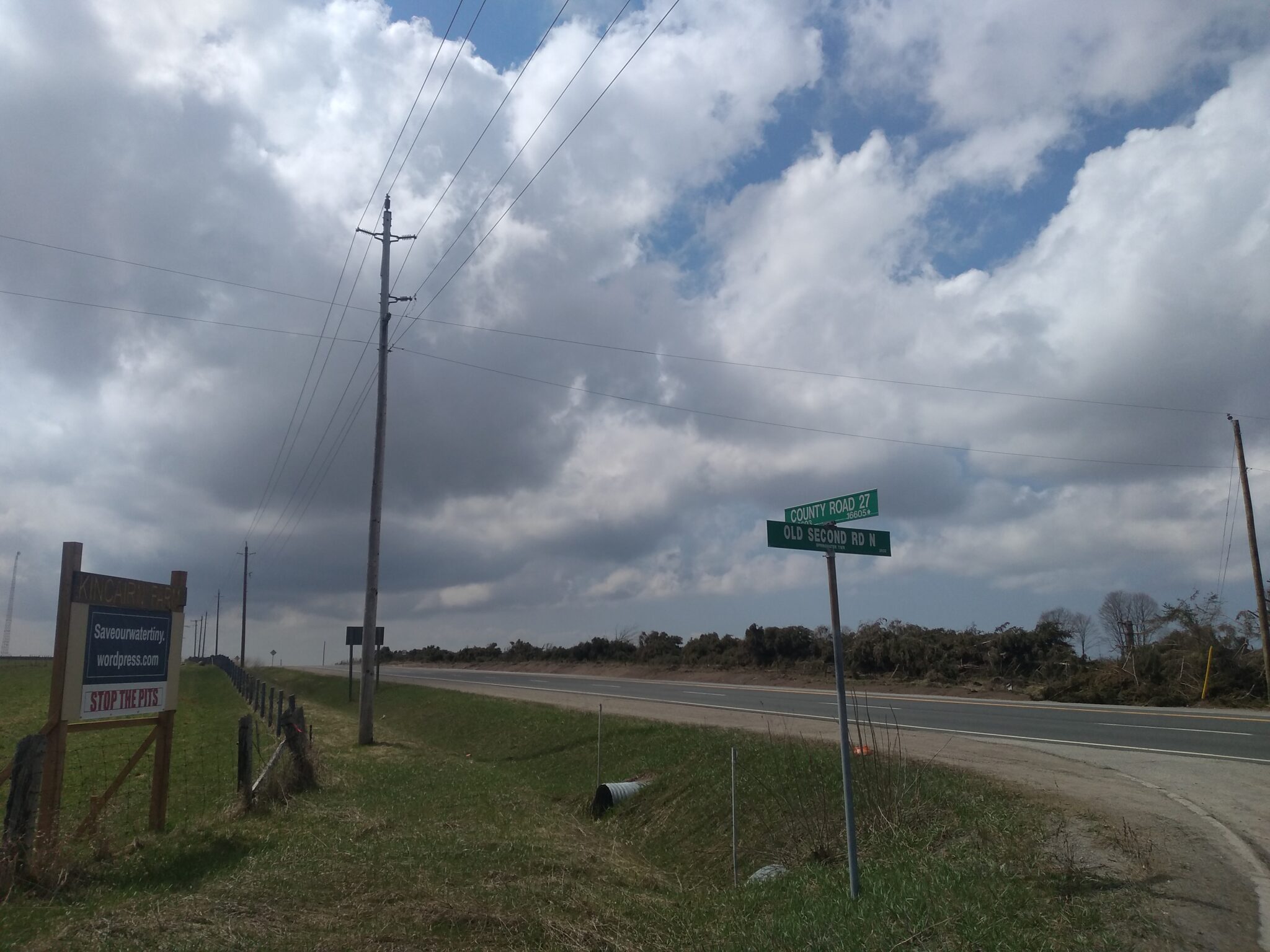 It’s not known why or by whom these decades-old spruces along a kilometre stretch of Highway 27 were cut – but the loss is just one part of ongoing disruption to the French’s Hill recharge area. AWARE Simcoe photo

The water that gushes out of artesian wells around Waverley in North Simcoe is so clean that it has astonished dozens of scientists in different countries who have tested it for a wide range of contaminants.

“This water,” geochemist William Shotyk told Tiny Township Council last week after an explanation of the factors at play in the natural water filtration systems and underlying aquifers and aquitards, “is not just great water or excellent water – it’s absolutely exceptional water.”

But will this globally unique resource survive the removal and disruption of soils, gravel and tree cover as aggregate extraction intensifies in the recharge area?

But Powell, who had spent a couple of days last week examining features of the study area, expressed severe misgivings about the ongoing level of aggregate extraction from the recharge area, known as the Waverley Uplands or, locally, as French’s Hill.

“I saw recently a plan to strip a side of French’s Hill,” he told council. “I guess it’s going to happen. That to me is going to be an absolute disaster, I don’t mind going out on a limb and saying that.”

And, he warned: “There are going to be consequences,” when the soil cover is removed and the water flows out of French’s Hill unconstrained.

Two companies have licenses in the area – CRH Canada Group Inc., through its division Dufferin Aggregates, and the Sarjeant Co. Ltd. CRH has one pit, with an application for an expansion that is being appealed by Tiny Township and the Federation of Tiny Township Shoreline Associations. Sarjeant has two pits.

In an email, Powell said he was astonished by the clearcutting and soil removal that has taken place in the area to be mined. “I was so shocked, and did not know how far they had already proceeded,” he wrote.

Shotyk, who owns a farm in the Elmvale area, has studied the water for 30 years as he moved through various academic institutions in Canada and Europe. He has in vain called for a moratorium on continued extraction until the inter-disciplinary team that has come together can get its work done. An understanding of how the Waverley-area water is cleaned naturally could be of critical importance at a time when the world is facing a water crisis, he has urged.

The team includes hydrogeologist John Cherry, Distinguished Professor Emeritus from the University of Waterloo and an internationally recognized expert on groundwater. The plan, Shotyk told council, is to seek funding from the Natural Sciences and Engineering Research Council of Canada (NSERC). Preparing the application is a complicated and lengthy process but it should be filed by September 2021, and if approved, work could begin later this year

The water has been tested in different laboratories internationally for every kind of contaminant – and again and again, scientists have been astonished by levels either below detection or far lower than those found in groundwater elsewhere.

One key parameter is chloride. Cherry has defined water with less than five parts per million of chloride as being pristine. “Our water contains significantly less than that,” Shotyk told council. The Waverley area water has been tested by five different international laboratories between 1992 and 2019, with results at or below one ppm of chloride.

The first indication of the unusual cleanliness of the water came when Shotyk took a sample from his farm to his laboratory, then at the University of Heidelberg, where it was tested for lead and compared with ancient Arctic ice cores. The ice had five parts per trillion of lead, the farm water less than one part per trillion.

Organic contaminants are of concern in agricultural regions, Shotyk noted. Jean-Daniel Berset of Berne, Switzerland, tested for hydrocarbons and pesticides in 2009. “He was not able to detect anything,” Shotyk said. “He has never before seen such clean groundwater.” In 2015, Alberto Pereira of Innotech Alberta scanned the water for 75 pesticides and in all cases they were below the level of detection.

For full details of what is known of the water, the ongoing data collection from dedicated wells on the Shotyk property, and what is to be studied, go to the Tiny Township YouTube channel of April 7, 2021, Committee of the Whole Part 1 – 1:10 to 2:10 timeframe.

The NSERC funding model requires researchers to partner with organizations, which can be from the private, public or not-for-profit sectors. The two scientists asked for Tiny Township to become a partner – and councillors readily agreed.

Powell emphasized that every level of government will be asked to become a partner in the project and asked for council’s help in bringing other stakeholders, especially the aggregate companies, to the table.

“In the interests of transparency, if an aggregate company has data that shows there’s no possible way for their industry to impact the water – if they have such data, please show us the data and show that data not only to us, but to all the other stakeholders, including the landowners in the area,” he said.

He added that another aspect of the project is that research will be released in real time, and not withheld for publication at the end of the project, in the interest of informing the public and assisting in developing policy.

There is an undoubted public interest in the water: people come from far and near to collect water that gushes from the “flow” at the side of County Road 27 north of Elmvale. And a 25-year battle to protect the water culminated in 2009 in the defeat of Dump Site 41, a landfill where waste from across Simcoe County would have been piled on top of the aquifer.

But now, the future looks bleak. The excavation is taking place rapidly on private property, out of the public eye, by companies headquartered elsewhere – in Dublin, in the case of CRH. The history of Site 41 means there’s little trust that oversight by the Ministry of the Environment, Conservation and Parks will protect the water.

In the race against time, will French’s Hill be destroyed as the effective clean water production system we know it to be – before the scientists are able to study how this system works? Gravel versus water: private commodity versus public good – it’s the story of our time, playing out in a corner of rural Ontario, with a globally significant resource hanging in the balance.

7 Responses to “Major study of “exceptional” water planned – but will it survive “disaster” of aggregate extraction?”