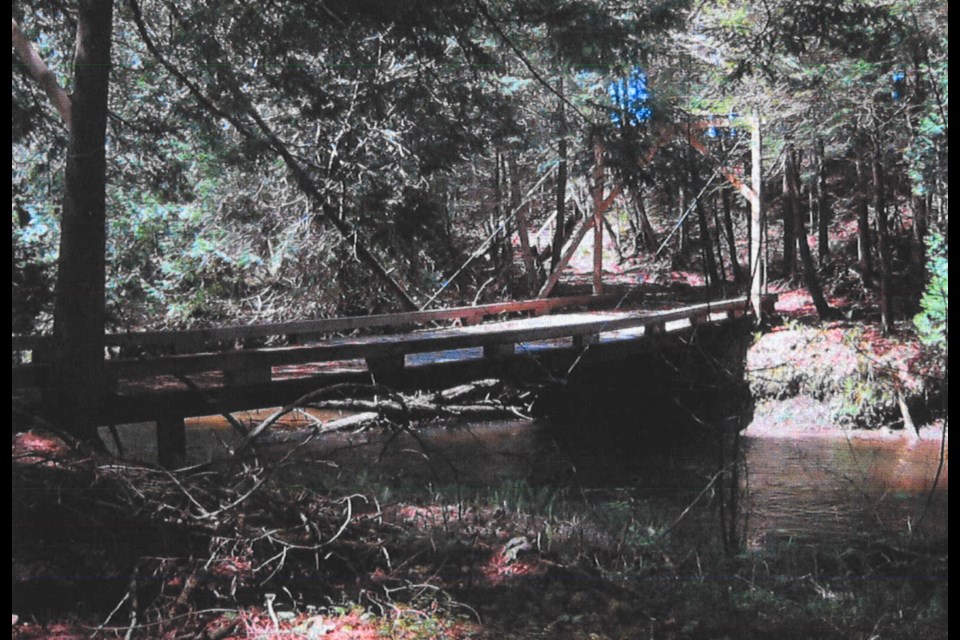 ‘This is a win for the environment,’ says lawyer acting for the local conservation authority; Tom Rennie said he is ‘pleased’ matter has been resol

An Oro-Medonte-area developer has pleaded guilty to doing work — without a permit — on a protected property and has been ordered to pay a fine of $1,000 and rehabilitate the disturbed land.

Crestwood Park Holdings Inc., through its principal, Tom Rennie, admitted to undertaking development on the land at 99 Mount St. Louis Road in Oro-Medonte Township, near Concession 7, through which the Coldwater River flows, between Aug. 23, 2017 and Nov. 13, 2018 without permission.

According to an admitted statement of facts read into the court Monday, two bridges and a staircase were built on the property without a permit.

“This is a win for the environment,” John Olah, the lawyer representing the Nottawasaga Valley Conservation Authority (NVCA) which has jurisdiction over the area, said following the hearing.

But a neighbour questions whether the fine will be a sufficient deterrent for developers in the future.

“It would appear the bar has been set low for any company considering undertaking development on environmentally protected lands in the province,” said Robert Young, who lives on 65 acres next to the Crestwood land. “How are developers going to view this adjudication?

“These two bridges were constructed in the Coldwater River valley on environmentally protected lands by Mr. Rennie without the knowledge of the NVCA and were intended to be used commercially for future patrons of Mr. Rennie’s proposed new Webers restaurant,” Young said.

Young said one of the bridges was constructed, in part, on his property without his permission or knowledge and he was concerned future patrons using the bridge would end up on his side of the property line and impact “the pristine, natural river valley environment.”

Crestwood’s Rennie was jointly charged but the charge against him was dropped.

“The purpose of erecting the foot bridges was to allow access to the remainder of the property (the eastern portion), which was inaccessible due to the river,” said Rennie in an emailed statement after the hearing. “I acknowledge my mistake of not obtaining a permit for this particular purpose, and in accordance with the Restoration Order have removed the southwest bridge and am making agreed-upon modifications to the northeast bridge.

“I am pleased this matter has now been resolved with NVCA and I look forward to having continued access to the entirety of the property.”

The idea, he said, was to create foot bridges for safe passage over the river.

The staircase to the river was allowed to remain.

In addition to removing one bridge and remediating the affected land, the accompanying order mandates Crestwood to submit a removal and restoration plan and provide a certification of implementation by June 1.

It must also prove to the NVCA that the design of the northeast bridge crossing addressed the control of flooding, erosion, pollution and conservation issues and that it is designed only for pedestrian use.

Rennie, the owner of the iconic Webers restaurant on Highway 11 which serves as the unofficial gateway to cottage country, had been working toward establishing a gas station, community facility and two restaurants — including another Webers — on 8.5 acres of land along Mount St. Louis Road in Moonstone, near the local ski resort and Highway 400.

Last summer, he sought a minister’s zoning order for a future rest stop on the property zoned rural/agricultural and environmentally protected.

According to the NVCA, much of the property consists of wetlands, a cold water creek which accommodates cold water fisheries species, such as brook trout, and is therefore regulated for wetlands, flood plain and erosion hazards.

2 Responses to “Company fined $1,000 for developing environmentally-sensitive property in Moonstone”