Home » Issues » Agriculture » ‘A stupid place to put the highway’

‘A stupid place to put the highway’ 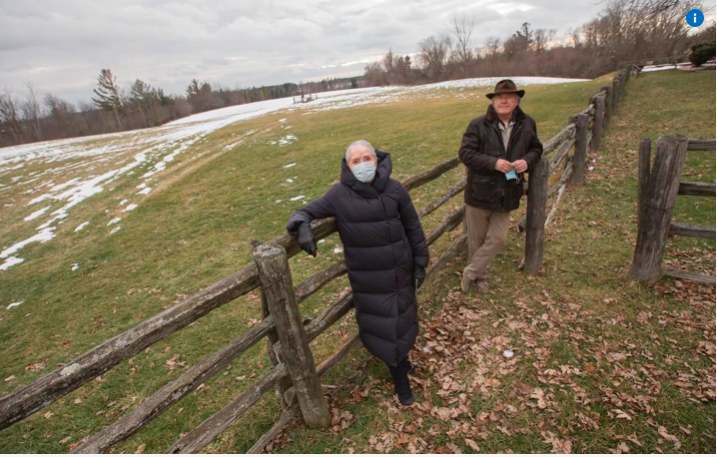 Tereruve Vlahovic and her son Rene on their 80-acre farm in Vaughan, slated to be taken over for the proposed GTA West highway.  -Toronto Star photo

When Rene Vlahovic talks about his family’s 85-acre farm in the north end of Vaughan, he describes the hilly terrain he walks on his weekend hikes, the deer and wild turkeys he sees daily, and the fertile farmland that grows soybeans.

The province, however, sees his farm as prime real estate … for a highway.

According to Vlahovic, his farm at Kirby Road and Highway 27 is a key part of the mega highway project called GTA West Transportation Corridor, a four- to six-lane freeway and transit project that will join Halton Region to York Region, cutting through Brampton and Caledon and Vaughan to end at Highway 400 — only 20 kilometres north of Highway 407. Along the way, it will raze 2,000 acres of farmland, cut across 85 waterways, and pave 2,500 acres of protected Greenbelt land in Vaughan.

The highway was cancelled in 2018 under the Liberal government after years of studies and environmental assessments, ultimately stalling after an advisory committee found it was “not the best way to address changing transportation needs” of the region.

But the estimated $6-billion highway was revived shortly after Doug Ford’s win, hidden in one of his government’s budgets.

Natasha Tremblay, spokesperson for Transportation Minister Caroline Mulroney, said the highway is expected to have 300,000 vehicle trips per day and is necessary “to improve Ontario’s highway network, reduce travel times and help alleviate traffic congestion across the GTA,” especially given the forecast for population and jobs growth in the region.

But an increasing number of area residents aren’t convinced.

Vlahovic’s parents bought the rolling farm in 1965, where his 90-year-old mom still lives. He was told two years ago the entire farm would have to be expropriated to build a train station for the light rail planned as part of the transportation corridor. Vlahovic, who works in the construction industry, said he has no qualms with smart growth, but he argues this highway doesn’t make the cut.

“This is a stupid place to put the highway,” he said. “It’s going to graze up against people’s property, it’s going to go through some very rough terrain … and the congestion that’s going to be created north and south (on Highways 410 and 400) because of this highway is going to be a huge disaster.”

He’s not the only one trying to make sense of the new road. Residents in Vaughan, Caledon, Brampton and beyond are organizing opposition to GTA West — also called the 413 — concerned it’s being fast-tracked during a pandemic without adequate environmental assessments, widespread public consultations or even a sound rationale for how it will actually improve the region’s gridlock.

Last year, the Ministry of the Environment, Conservation and Parks said it was proposing regulations to streamline the environmental assessment (EA) process for the GTA West project.

According to the posting on the environmental registry, the regulation changes would permit “construction to start earlier,” and allow for the building of new bridges, bridge expansions and transitway station construction — all before the completion of the environmental impact assessment report.

The province is hoping to complete the EA by the end of 2022.

“I think people are scared. They don’t want to lose their homes, their conservation areas, or their sources of drinking water,” said Sarah Buchanan, a project manager with the advocacy group Environmental Defence. “But the acceleration of the project and the clear signals from the province that they want this to move as quickly as possible and they are willing to sacrifice the environment, is making people really nervous.”

Normally, legislation prohibits development in the Greenbelt. However, provincial infrastructure projects are permitted.

Among the thousands who offered feedback on the regulatory changes, which have not yet been finalized, was John MacKenzie, CEO of the Toronto and Region Conservation Authority (TRCA). MacKenzie sent an eight-page letter to the province in August 2020 highlighting the extensive environmental damage the project could cause to the fragile ecosystem of the region.

“The technically preferred route crosses multiple TRCA-owned properties; multiple significant natural heritage features, including valley and stream corridors, headwater streams, forests, wetlands and will impact core features, habitats, species and wildlife connectivity; could create or exacerbate flood and erosion hazards; will increase chloride contamination in natural features; and reduce the ability of our natural areas to be resilient to the impacts of climate change,” wrote MacKenzie.

Among the anticipated major ecological impacts of the highway identified by the TRCA: More than 130 hectares of wetlands affected, approximately 85 watercourses disrupted (including 10 deemed highly sensitive) and the loss of at least 10 species at risk, including animals like the snapping turtle and western chorus frog.

MacKenzie’s letter also raises concerns about the fact that the Ministry of Transportation is exempt from any kind of oversight from conservation authorities. “TRCA has significant concerns there is no mechanism in place for the protection of life and property or the management of natural resources at the detailed design stage of the GTA West.”

“As the preferred route continues to be developed, the government will continue to work with local and Indigenous partners, as well as environmental stakeholders and members of the public,” she added.

During previous stages of the study, an advisory group drafted guidelines that included recommendations to mitigate the impacts of building a highway through the Greenbelt.

According to the province, the recommendations were considered during route planning and will also be during the current preliminary design phase, where impacts to Greenbelt areas are unavoidable.

When the Liberals cancelled the project in 2018, work had included detailed EAs of proposed routes, studies and numerous public meetings that took place over a decade, costing $14 million. But the government was no closer to determining a route.

As part of that research, the Liberals commissioned a report in 2012 that found the highway could generate a billion-dollar economic impact in annual GDP by 2031, improve commercial vehicle travel times during peak period and reduce the truck traffic using local roads by about 25 per cent.

But the expert panel that ultimately killed the highway questioned the rationale behind the project, suggesting it would only save GTA commuters 30 seconds per vehicle trip.

The same panel suggested there were other ways to achieve the same outcome, including congestion pricing on GTA highways, adding dedicated truck lanes and reducing tolls on the underused Highway 407, and developing land in a “more compact” way.

Instead, after just one public consultation, Ford’s government announced the preferred route for the highway in August 2020.

Jane Fogal, a local and regional councillor in Halton Hills, one of the only municipalities to oppose the 413, said the options mentioned in the expert panel’s report are not even being explored.

Fogal said she recently asked Ministry of Transportation representatives at a town council meeting if they were considering other options, “and they just said no.”

“Building another highway is the easy thing to do. The developers get to build the houses they want to build … and the sprawl will continue,” said Fogal.

Some residents say the pandemic has also made it easier for the government to push through a highway no one wants.

“In this community, there is a total lack of awareness of the road — how big it is, where it’s going to be, when it’s going to come,” said Tony Malfara, a resident of Kleinberg in Vaughan, adding that he too has never received information on the highway.

“COVID has made it harder for us to get the word out … and people have so much other stuff on their minds,” said Malfara. “Maybe the government is using that to their benefit.”

Jenni LeForestier, a Caledon resident, said she has taken part in the stakeholder meetings since the highway’s first iteration. “This time around, there has been such little consultation with the people on the committee, virtually none,” she said.

Most municipalities along the highway have endorsed the project. In 2018, Caledon Mayor Allan Thompson lamented the cancellation of the project, saying it had caused uncertainty for the town’s major investors, who had been waiting a decade for a decision. Vaughan’s council also endorsed the project in 2019, despite the massive potential environmental impact on the municipality.

While it has publicly endorsed the highway, Brampton appears to be having second thoughts. With the GTA West expected to run through the last undeveloped area of Heritage Heights, which includes rivers and wetlands, city council recently endorsed a pedestrian-friendly boulevard option instead of a freeway to run through the future suburb.

“This would allow for dedicated lanes for trucking, for transit and for active transportation. It’s a boulevard concept, which many European cities are doing,” said Brampton regional councillor Martin Medeiros.

“It’s our attempt to turn on its head this conventional thinking that this has to be a concrete road, and essentially you build warehouses around it,” he said. “We really want to bring something special to the area.”

But Brampton’s reimagining has received pushback from those in the trucking industry, the local board of trade and even the Ministry of Transportation, which has publicly stated that its vision for the highway doesn’t align with Brampton’s.

Brampton resident Divya Arora said the new highway will be visible from her home, where she can already hear the constant traffic from Highway 410.

“There aren’t many places here to just get away from it all,” said Arora, 23, who started a youth group called Peel Community Climate Council to bring attention to the highway.

“When I envision the highway, all I can see is more sprawl, more cars on the road, and more pollution,” she added. “It’s not

One Response to “‘A stupid place to put the highway’”