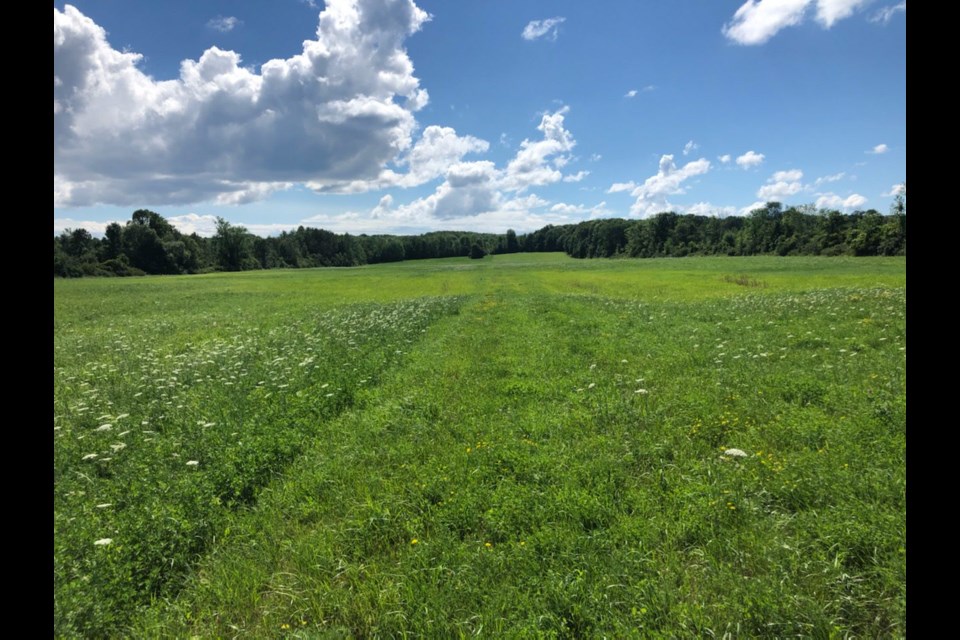 Property pictured here is a 48-acre chunk of land on Triple Bay Road in Tay Township for which Cherry Blossom Village is planned.

It might be just a three-letter acronym, but for some, MZO has become a four-letter word.

Local resident Bob Codd says the province and municipalities are employing Minister’s Zoning Orders (MZOs) with fervent abandon to the detriment of both the environment and due process, including a recent move to issue one for a development on an provincially significant wetland in Pickering.

“It’s a way of shutting out the general public from objecting to pretty much anything,” said Codd, who is interim vice president of the Midland-Penetanguishene Field Naturalists.

“I guess the big thing for me is that it eliminates environmental protection so that they can ramp up developments.”

At a council meeting in August, councillors approved a staff recommendation to support Dr. Howard Bloom and Dr. Robert Cooper’s request for a minister’s zoning order approving the residential care facility for those with complex intellectual needs, such as a high-needs autism.

And while he noted facilities like Cherry Blossom Village are needed in the community, Codd doesn’t understand why the facility’s proponents couldn’t have gone through the regular channels to have their project approved.

“The proponents’ decision to seek an MZO eliminates any public discourse on the matter,” Codd said. “The thing that bothers me about this development is that by accounts, they had support from almost everybody. There were very few objections. But rather than just let the process work its way forward, the council jumped on the opportunity to pursue an MZO.

“I don’t think there was going to be a lot of pushback on it. So I got really angry when I heard they were just going to ram it through without the opportunity for any public input.”

Similar moves have also been employed in New Tecumseth where council voted to ask for an MZO for a 999-unit development that the Simcoe County Greenbelt Coalition notes would be “built on a floodplain, paves over farmland, and is outside of where growth was planned for, breaking their own bylaws meant to protect Beeton from flooding.”

In Innisfil, the 150,000-person mega-development, The Orbit, has also been sent to the province for an MZO.

While MZO proponents say the tools eliminate red-tape in getting developments built, groups like the greenbelt coalition described them as “a weapon of mass destruction in the planning world” since they “override the processes that ensure public consultation, environmental studies and impacts to agriculture and endangered species are considered.”

An MZO cannot be appealed to the Local Planning Appeal Tribunal (LPAT), formerly the Ontario Municipal Board (OMB).

Codd has a theory about why MZO use has become more prevalent these days and equates it to the Ford government “selling off the environment to buy economic growth.

“He ran on a fiscal responsibility platform,” Codd said, referring to Premier Doug Ford. “And because it’s COVID, no matter what he tries, he can’t deliver on it. So this is almost like a desperation thing…to bypass zoning procedures so that he can get whatever development he can.

“It’s a pretty desperate attempt to prove that he can manage the economy much more successfully than the Liberal government before him.”

But Simcoe North MPP Jill Dunlop said MZOs and MZO applications have been around for years and were employed recently for an Oro-Medonte project.

“Our priority is not to ignore environmental concerns,” Dunlop said, noting the environment remains of strong importance to both her and the government.

And while opponents will paint a picture of the government approving MZOs willy-nilly, Dunlop pointed out that Municipal Affairs and Housing Minister Steve Clark recently rejected an MZO for an Oro-Medonte Township, mixed-use development on 133 acres on Penetanguishene Rd.

In that case, the 133-acre property, owned by the McLean family for generations, sits right along Barrie’s border. It requires Official Plan and zoning-bylaw amendments to turn farmland into seniors and long-term care space, affordable housing and parkland. There is a house and several farming-related buildings on the property now.

Locally, however, Dunlop said the plan to seek an MZO for the Tay Township project makes sense because of the benefit it will bring to the community.

“There is a need in the region for that type of housing,” she said, noting that MZOs can help municipalities move projects along and help create jobs without ignoring the environment since they “would not be touching the greenbelt.”

That said, Codd said he finds it difficult to fathom what the province was thinking with another recent decision that went the other way from the Oro-Medonte experience. In that instance, an MZO approval paved the way for a project in Pickering that opponents contend will build on a provincially significant wetland.

And he also has a warning about what he see as a heavy uptake in MZO use.

“Even if people don’t give a hoot about the environment or nature whatsoever, you better be alarmed by the fact that he’s trying to quash any type of public input or debate about matters.”

In an email campaign voicing their strong opposition to the Pickering case, in particular, Ontario Nature has so far garnered more than 5,000 emails sent to Clark about MZOs.

In it, the group said the government is showing “its true colours with recent moves to ride roughshod over protections for Provincially Significant Wetlands (PSWs).

“The first sign of trouble was a Minister’s Zoning Order (MZO) to demolish three PSWs on agriculturally zoned land in Vaughan so that a Walmart distribution facility could be constructed,” the note reads.

“The second was a decision to destroy a large coastal PSW in the City of Pickering to make room for a warehousing facility, again through an MZO. The next domino may be five wetlands within the provincially significant East Humber River Wetland Complex in Vaughan.”

Ontario Nature points out that wetlands are critical in building community resilience to climat change impacts such as flooding and provide other immense benefits such as water filtration, carbon sequestration, recreational opportunities and wildlife habitat.

“The Minister does not have to give notice or consult with the public prior to issuing an MZO and there is no opportunity for appeal.”