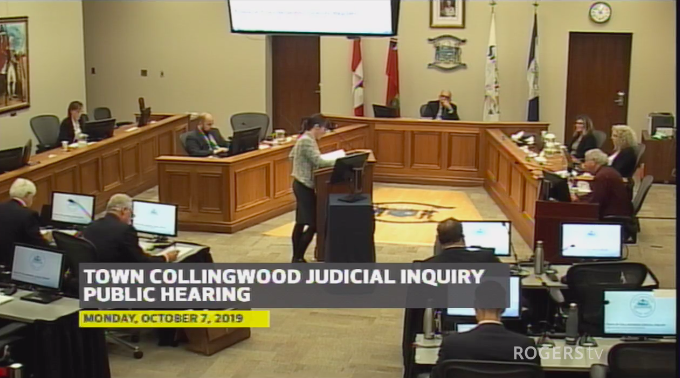 This is the second in a series of three reports on the Collingwood judicial inquiry, dealing with recommendations of interest in other municipalities

The Collingwood judicial inquiry into the sale of the town’s electrical utility and procurement of a new recreation complex wasn’t only about Collingwood. As Justice Frank Marrocco makes clear in his report, the issues he examined and the conclusions he reached are applicable to municipalities across Ontario.

Marrocco has organized his 306 recommendations into topics, addressing key municipal positions and specific municipal functions in turn, stating: “This structure permits a comprehensive discussion of the considerations that underlie the ethical exercise of each role and the resulting responsible municipal action,” he states.

Marrocco finds that much of the cause of the Collingwood fiascoes are the result of a misunderstanding of the role of the mayor. Sandra Cooper, the mayor of the time, made many key decisions without the knowledge or approval of council.

The misunderstanding flows in part from the Municipal Act, 2001, and its description of the head of council as “the chief executive officer” of the municipality. Unlike a corporate CEO, the head of council does not have the power to commit the municipality to anything unilaterally, Marrocco notes, but the title led to “the erroneous belief… that the mayor had the power to provide unilateral direction on behalf of council.”

This in turn “underpinned the lack of transparency around the origins of the Collus share sale, where directions from the mayor were treated as if they had the weight of directions issued by council.”

Marrocco’s Recommendation #1 is that the Ontario government change the Municipal Act to “remove the inaccurate description of the head of council as the chief executive officer of the municipality. The head of council of a municipality is responsible to council and does not have the authority to bind council.”

Recommendations #228-264 deal with the need for rules to make lobbying an open process at the municipal level.

He recommends a Lobbyist Registry to include all those who are paid or represent a business or financial interest whose objective is to influence elected officials or staff, with information on:

Other recommendations laid out in Volume 4 of the Marrocco report include
-A gift registry, on which both council members and staff should disclose publicly all gifts they receive from persons doing business with the municipality.
-The municipality’s code of conduct should prohibit council members from accepting gifts, favours, entertainment, meals, trips, or benefits of any kind from lobbyists.
-Staff should be trained in writing clear, accurate, objective and comprehensive reports.
-Information disclosed by management to a member of council should be disclosed to all members of council.
-Former council members and former staff should be prohibited from lobbying on matters on which they were involved during their tenure at the municipality. With respect to other activities, former council members should be prohibited from lobbying staff or elected public office holders for a minimum of one year after they leave office.
-The group of family members covered by the Municipal Conflict of Interest Act be expanded to include, at the minimum, a spouse, common-law partner, or any person with whom the person is living with as a spouse outside marriage, a parent, including stepparent, and legal guardian, a child, including stepchild, a grandchild, siblings, aunt, uncle, nephew, niece, first cousins; and in-laws, including mother- and father-in-law, sister- and brother-in-law, and daughter- and son-in-law. Presently only parent, spouse and child are included.

The municipality’s Integrity Commissioner is given a leading role in many of Marrocco’s recommendations. Experience in some municipalities has led observers to regard those appointed to this god-like position with a somewhat jaundiced eye.

The fact that Springwater Township recently appointed a third Integrity Commissioner is an indication of the sensitivity of the issues that are addressed. The first was the firm Principles Integrity of Vaughan, who were let go, but came back to complete an investigation of Springwater Mayor Don Allen’s behaviour following a charity event which led to (subsequently withdrawn) criminal charges of impaired and dangerous driving.

The second is the current occupier of the position, Robert Swayze of Caledon, who advised council they could not impose a penalty because Principles Integrity had not found that he had violated the township’s code of conduct. The Principles Integrity report lacked clarity on that point, but principals Janice Atwood-Petkovski and Jeff Abrams refused to provide further explanation.

Council went ahead and docked the mayor’s pay, and then in a subsequent closed meeting, appointed a third Integrity Commissioner, Harold Elston of Collingwood, not as a new IC, but to provide another opinion on the one issue. A report by Elston was the subject of controversy in Adjala-Tosorontio during the last municipal term for an investigation of then deputy mayor (now Mayor) Floyd Pinto.

A code of conduct can be weaponized against members of council who have a minority view. An Integrity Commissioner has the power to cause considerable anguish and expense. Those are issues that did not fall under Marrocco’s purview – but deserve attention from the provincial government.

One Response to “Role of mayor, role of lobbyists addressed in Marrocco report”