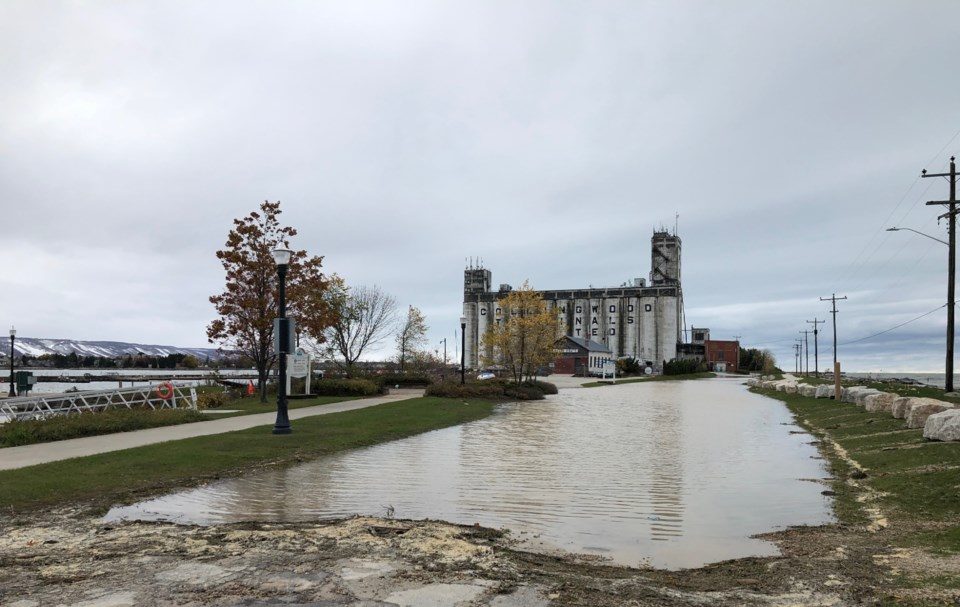 Heritage Drive from the harbour to the terminals flooded after heavy winds and waves during the fall of 2019. Erika Engel/CollingwoodToday photo

Local conservation authorities are both encouraged and discouraged by a recently released strategy from the province on managing flooding impacts in Ontario.

“Who’s going to fund this?” asked Hevenor. “I think, again, it’s another movement away from provincial funding, putting it onto the laps of municipalities, conservation authorities, and private business.”

According to the Ontario 2020 Flooding Strategy, flooding is the most significant natural hazard in Ontario in terms of death, damage and civil disruption. The report also states flooding is the costliest type of natural disaster in the country.

“Nationally, spending on flood-related damage accounts for 75 per cent of all weather-related expenditures,” states the report.

While many of the “action items” meant to improve response relate to continuing efforts already underway, the strategy does recommend procuring emergency management software to better interact with communities during emergency situations. The strategy also states the province will “review” its Disaster Recovery Assistance for Ontarians Program.

Hevenor said the NVCA’s funding from the province for flood management was cut by 50 per cent in 2019, which translated to a loss of $91,000 for flood work by the conservation authority.

“There’s no talk of putting that funding back in, so that’s a bit disappointing from that aspect of it,” said Hevenor.

The release said the cost of reducing flooding risks has to be shared.

The provincial strategy seems to agree the approach should be collaborative, which is an encouragement for Hevenor, and according to Lanthier.

“One thing we really like as a conservation authority is the trending to a multi-ministry approach,” said Hevenor. “It has to be.”

Lanthier stated in the news release he is pleased to see the strategy recognize the need for a multi-agency, multi-ministry approach.

The Ministry of Natural Resources and Forestry (MNRF) is the provincial lead agency when it comes to flooding and flood management.

However, the strategy released by the province states Ontario takes a collaborative approach and the strategy recommends building further on those partnerships to manage the risk of flooding by working together on actions set out in the strategy.

The report lists other provincial ministries such as the Solicitor General, Municipal Affairs and Housing, Infrastructure, Transportation, Agriculture, Food and Rural Affairs, Environment, Conservation, and Parks as part of that partnership. The document also states municipal and conservation authorities are “central” to the success of flood management.

“It is not hard to see that flooding, whether it is as a result of spring freshet, urban flooding or high Great Lakes water levels, is having a growing effect on Ontarians and has reminded us that there is always room to improve,” he stated.

While the report acknowledges that flooding won’t go away, the goals set out in the strategy state the province is aiming to work with partners to increase public health and safety while also reducing property, infrastructure and environmental damage, economic loss, and social disruption.

Action items laid out in the strategy include enhancing flood mapping by updating provincial standards for mapping and building a multi-agency flood mapping team including members from the provincial, federal and municipal governments as well as from conservation authorities.

Hevenor said he’s glad to see a focus on flood mapping and stated it’s an important tool in reducing the damage caused by floods to infrastructure and property.

Flood mapping establishes lines where flooding can occur, based on past data collected and scientific observation, and establishes buffer areas where development cannot occur due to the risk of flooding.

“We have to work with local partners and citizens to keep hard infrastructure out of flood plain areas,” said Hevenor. “What we want to see is … Mother Nature acting as the resilient sponge that she is.”

Hevenor said the conversation of development in flood plains near streams, rivers, and lakes is a “repetitive” one.

He said it’s important for municipalities, the province, and conservation authorities to delineate the flood line areas through good engineered surveys and studies.

“A developer … they’re trying to maximize the usage of that land, and that’s good business practice,” said Hevenor. “What we’re trying to do is protect the wetland areas that are there.”

He referred to extensive lakeshore damage this year from high water levels in the Great Lakes.

“The high water levels are challenging those shorelines,” said Hevenor.

In Collingwood, several meters of shoreline was eroded due to high water levels and high winds this fall, including at Sunset Point.

Heritage Drive to Millennium Park was flooded on more than one occasion and is currently closed to vehicular traffic due to flooding and erosion. The town is warning pedestrians there are sinkholes along the trail to the park as well.

Waterfront trails in Collingwood have been closed since spring 2019 due to high water levels and erosion.

Previously, the NVCA has identified Collingwood as the municipality in the watershed with the greatest flood risk.

The province’s strategy also includes action items for increasing public awareness and education by growing the amount and quality of flood information available to the public, and greater transparency around water management decisions from all levels of government and authorities.

The strategy outlines a need for clear roles and responsibilities when it comes to identifying areas that pose a public risk. As it stands, the province, municipalities, and conservation authorities have mandates to identify public risks.

The strategy speaks to the importance of early warning system in flood management.

The strategy states the province is committed to investing $4.7 million in a hydrometric (stream gauge) network to bolster an early warning system to help municipalities better prepare for flood events. There is an existing Canada-Ontario agreement for hydrometric monitoring that already involves financial commitment from both the federal and provincial governments toward managing a stream monitoring network in Ontario.

Flood warnings sent out by the MNRF or by conservation authorities are often sent as a result of information received from the network of 600 stream gauges installed across the province. The stream gauges are concentrated in watersheds with the greatest population and therefore higher risk of harm.

“Flooding is not going to go away,” said Hevenor. “It’s going to occur. We have to really look at ways we can protect our existing infrastructure with the help of early warning systems.”

He’s pleased to see the province commit to an investment in stream monitoring.

According to the report, the MNRF provided 890,000 sandbags to municipalities in southern and eastern Ontario in the spring of 2019. There were also more than 60 fire ranger crews sent to municipalities facing flood events.

For more about how private citizens can be prepared for flooding and manage the risks, visit the NVCA flood information page here.