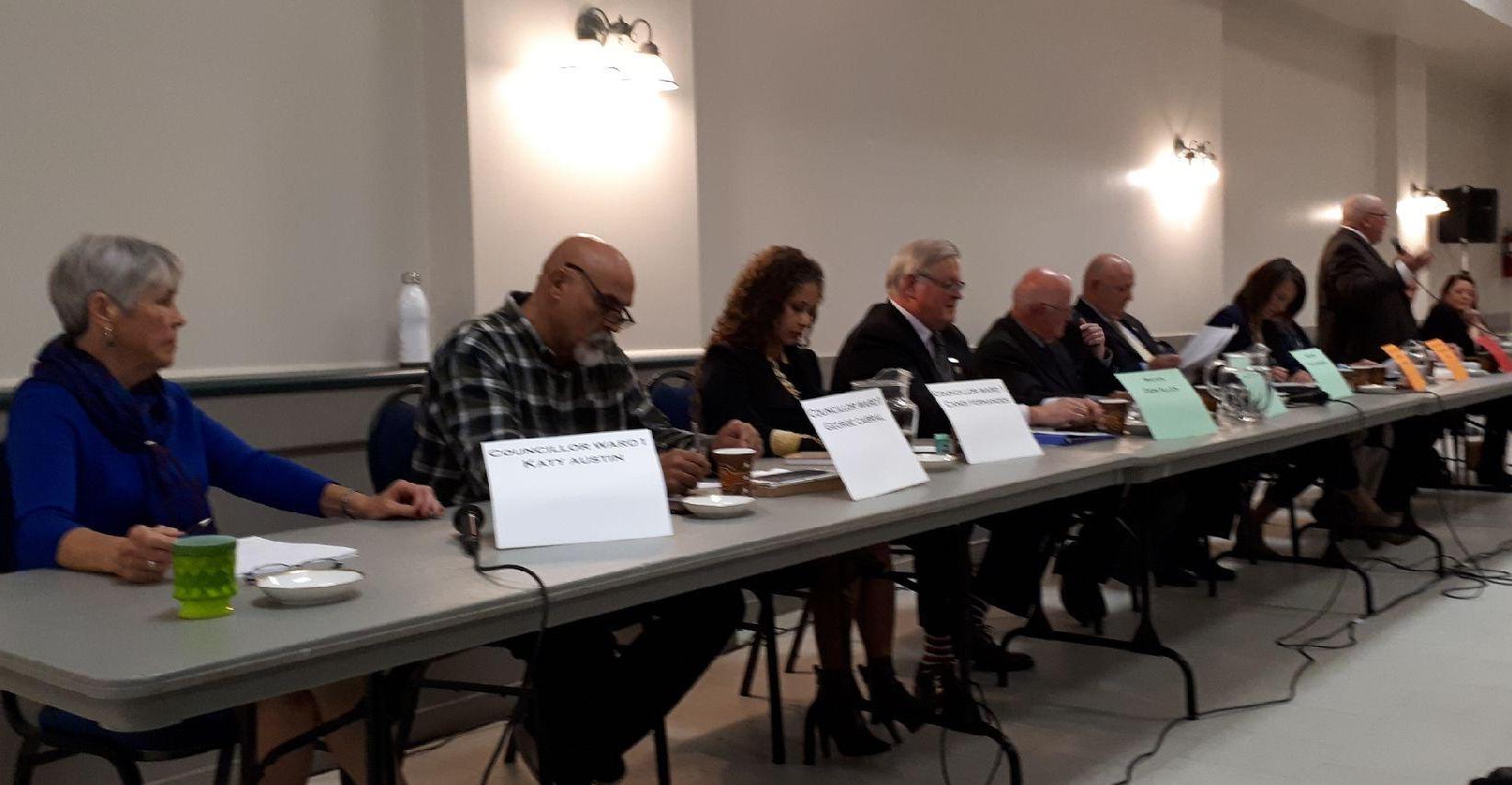 An all-candidates’ meeting held in Elmvale last Tuesday was well-attended – the community hall was packed – but surprisingly low-key, when contrasted with the strong differences indicated by the battle of the signs across the township.

Sponsored by Focus Elmvale and the Elmvale BIA, the meeting was a forum for the mayor, deputy mayor and Ward 1 candidates, along with school trustees. George Allen was the moderator and read from a selection of questions that had been submitted in writing. Topics included the revitalization of Elmvale’s downtown, police presence, balancing spending on infrastructure versus recreation and culture, as well as the Midhurst Secondary Plan and the need for industrial/commercial growth.

The Midhurst Secondary Plan was and is a major concern for some residents. What have you done / what will you do to alleviate those concerns?

“I think the key thing is that we’ve taken control of it and managed it much better, “ said mayoral incumbent Bill French, with more public input and consultation. “We’ve changed the way it’s going to come about.”

He noted that there’s still no final approval. He added that the estimated cost of servicing the development has risen from $119 million in 2009 to $328 million more recently and that his own prediction 10 years ago, was that it would rise half a billion dollars.

He said he’s encouraged that there’s a new way for the municipality to get funding from developers for the cost of servicing, called capital contribution, that takes into account the needs in the entire township. He cited his business background managing small companies that grew into major enterprises because “we’re not dealing with small change here. My experience coming to the table and negotiating agreements will be a great asset if it does start to develop.”

“We have to get two steps ahead of the developers and the province and make sure that the impacts are not going to end up costing us a fortune,” said mayoral candidate Tony Guergis.

“We recognized as council very early on that the Midhurst Secondary Plan and the size of it was a situation that was created right here in Springwater Township,” said Guergis, first elected Ward 4 councillor in 2003 and back for a second run at the mayoralty, a position he held in 2006-2010. “Council of the day tried to do their best to describe what would be a planning area. When the province adopted our Official Plan… they adopted that as a settlement boundary. It was far bigger than any council wanted to have it but it is there.”

De-designating the land is a “tremendous challenge,” Guergis said, particularly as the province is working with a target of another four million people coming into the GTA by 2041, the majority in the 905 area “which means they will spill into the 705.”

“I’m for development, but the right type of development,” said mayoral candidate Don Allen, presently deputy mayor. If started now, such a development would not happen in that location, he suggested.“But be that as it is, this is twenty years in the making, we can’t switch it off like a light switch, we have to make the best of the situation.

Aspects of an environmental assessment are being reviewed by township staff and consultants, Allen said, with a determination still to come from the environment ministry. “I’ll want to certainly stay close to that situation.”

It could be another six to twelve months before it’s time to enter financial negotiations with the developers. “That’s where I feel my strength comes in, as well as other areas,” he said. “I am very good at the negotiating table to be creative with solutions and creative with ways of financing to minimize the negative impact on residents of the cost of what’s going to be built and where, and when, and how much the developers are going to pay for it.”

How do you intend to deal with the question of residential / commercial growth in the township?

“When the development community moves in, they can sell out the residential very quickly,” said deputy mayoral candidate Jim Sales. “The challenge is getting the industrial growth. Growth does not pay for itself – industrial/commercial is very cost-effective, residential is very costly, when you look at all the service required, so it takes a lot of work and effort to push the development community because it shouldn’t be about creating more bedroom communities, it should be about growing more vibrant communities, communities that have jobs, good jobs… It’s a challenge that we absolutely have to get ahead of and control.”

“Commercial growth, the problem is we don’t have any,” said deputy mayoral candidate Jennifer Coughlin, hoping to step up from the position of Ward 3 councillor. Solutions include servicing some areas to attract growth, releasing some of the red tape and assisting businesses already here that want to grow “but don’t have the support to do so.” She commended past and present councils for conditions on the Midhurst Secondary Plan in place “to safeguard the residents from the growth when it happens.” She emphasized the importance of the next council working with stakeholders. “Fighting against each other, nothing’s going to get done, we’re going to have things forced upon us.”

Although the meeting’s focus was Ward 1, as no all-candidates’ meetings had been organized elsewhere in the township, candidates for Wards 2-5 were given time but did not participate in questions. The following is taken from the candidates’ statements. For background information, check candidates’ submissions to the Springwater News.

“I am a doer who follows through and gets the job done efficiently,” said Don Allen. He plans to “ensure future growth provides benefits and progress and protects our communities, ensure that growth does not damage or compromise Springwater’s environment, work with council and staff for continuous improvement of the township.” He said other priorities are revitalizing existing businesses and attract new businesses to the township, supporting the agricultural community, continuing community development in all Springwater communities, ensuring careful and justifiable tax dollar spending, and improving Springwater’s relationships with residents, Simcoe County Council and provincial government. Allen stressed the importance of this election. “The next four years of progress and implementation will establish much of the character of Springwater over several generations. Four more years of the same will not achieve this to the extent that is possible.”

Bill French outlined his council’s achievements. “We are now in control of all development in Springwater, especially in Midhurst,” he said. “We took the bold move … and did direct funding of the Elmvale District High School renovation and expansion which will create a community hub for us. We enhanced our local recreation facilities in Phelpston, Hillsdale, Midhurst, Snow Valley and of course the recently opened splash pad in Elmvale.” A community improvement plan was completed, to help existing businesses invest and grow, he said. He lobbied for the county to reduce the tax rate on the vacant portion of area farms, and also lobbied for the county to include stops in Elmvale and Midhurst on the Midland-Barrie transit service. French said he was proud to have driven certain initiatives, such as being more transparent through “more question periods, more delegations, live-streaming council meetings, more town halls, more public engagement on matters of importance and providing annual updates.”

Tony Guergis noted that he had served an unprecedented three consecutive one-year terms as Simcoe County warden and portrayed himself as the experienced municipal leader the township needs. He said that in the last election the township elected “two inexperienced mayor and deputy mayor who represented special interest groups.” “Over this term we watched them fail and divide against each other as the legal and financial disasters unfolded. Sending one of them back to represent us sends a clear message – it says we’re not moving forward, that we are still divided and we still want this legal fight.” He cited among his achievements millions of federal and provincial dollars for the administration centre, the ball diamonds, and “many more grants to save taxpayers dollars.”

“We cannot afford to be reactive, we cannot afford to spend any more time or money fighting progress,” said Jennifer Coughlin. “We need to be managing and negotiating.” She paid tribute to the township’s staff – “we are fortunate to have this core group of talented and hardworking individuals,” she said, adding, “I have learned that effectiveness is compromise. When silos are created, micromanagement takes place and the focus of the council is not on relevant municipal business.”

Jim Sales detailed his 41 years of municipal government in Alberta and Ontario. Since moving to Springwater seven years ago he has worked as Barrie operations manager and Toronto fire chief. “During those 41 years I’ve learned how to operate efficiently, how to save money, how to build alliances and partnerships and ultimately how to manage our tax dollars. I am very familiar with every city service and operation. I’ve done it in small communities and large communities and I see a tremendous challenge before us in Springwater township.”

Ward 1 candidate Katy Austin said the greatest lesson she’s learned in her four years on council is that “one has to hear all sides of every issue before making a decision.” She said she’s proud of what council has achieved. “We have worked together as a team, we didn’t always agree on everything but when we made a decision, we stuck with it and moved ahead.”

Ward 1 candidate George Cabral said he prides himself on always looking past roadblocks in order to achieve consensus and produce results. “I’ll support development in our ward but always with a reference to maintaining our unique small-town character… Let’s manage what’s been legislated upon us and move forward. “

“Being a councillor is about balance and leadership, it’s about keeping your word and seizing opportunities,” said Ward 1 candidate Candi Fernandez, who promised to be an advocate for the ward.

Ward 3 candidate Wanda Maw-Chapman cited her 17 years on the Minesing recreation committee and promised to champion all issues that arise within the township. “I want to bring my support and make Springwater the best.”

Ward 3 candidate Tyler Seif said he grew up, lives and works in Springwater. “I’m available to hear all your concerns,” he said and referred the audience to his pamphlet.

Ward 4 candidate Anita Moore said she’s been listening to residents from “all four distinct communities in our ward… We all want safe communities for our families to live in, we want affordability and protectability… we want smart planning for development and trails and parks, green space and schools.”

Ward 4 candidate Craig Nixon referred to his 40 years in the trucking business and 25 years residence in Snow Valley. “I do not have any single issue,” he said, other than “one pet issue” – the bell sounded, cutting him off and he ended, “which you’ll have to read about in the Springwater News.” (It’s about homes for seniors.)

“If I’m re-elected I will continue to put the residents first,” Ward 5 incumbent Jack Hanna said. “For me, it’s a 60-hour a week job, those people who come to my house from all over the township… they know, I’m always available.” He urged voters: “Do your own homework, don’t base things on pamphlets and the ads you see in the paper, the number of election signs… there’s some misinformation out there.”

“My campaign efforts are not reliant on a slate,” said Ward 5 contender Reet Skelton. “My integrity, experience and comprehension of the government’s role of council are what I bring to the table. With your vote, I’ll navigate us through the changes that growth will bring.”