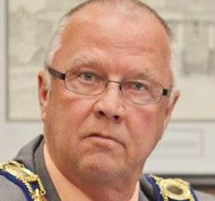 Town of Penetanguishene staff were “surprised” by the announcement that Mayor Gerry Marshall resigned on Aug. 22 and started work as chief administrative officer of Wasaga Beach Aug. 23.

Town clerk Stacey Cooper said Marshall gave written notice on Wednesday that he was resigning as of 11:59 p.m.

“Definitely everyone was pretty surprised,” she said.

However, giving such abrupt notice is allowable under the Municipal Act as an elected position differs from regular employment where two weeks’ notice is normal.

Marshall had also filed his nomination papers to become mayor for a third term.

Under the Municipal Act, Marshall cannot withdraw his nomination papers. He stated publicly that, if elected, he would forfeit the position.

“Dubeau has acted on his behalf before, (so) it’s pretty normal for our crew,” Cooper said.

For her part, Dubeau said she was “absolutely surprised.”

She has mixed feelings about Marshall’s move. On the one hand she said he has worked hard for the Town of Penetanguishene over the past eight years.

However, she is also disappointed.

“I am disappointed that things have unfolded the way they have. It would have been a much cleaner break if things could have happened before the nomination deadline,” she said.

If Dubeau knew that Marshall wasn’t interested in the job as mayor, the former mayor said she still would have filed her papers for deputy mayor.

The only other contender for mayor is Coun. Douglas Leroux.

“I felt good that I was going to become the mayor of Penetanguishene but I’m feeling better about it now.”

However, Leroux cannot be acclaimed because Marshall has not been disqualified.

Leroux said he is confident that he would have won.

“I am born and raised in Penetanguishene. I’ve devoted a lot of my life to civil duties in the municipality. I love my town.”

Leroux said he is the better contender because he is happy serving in his town and isn’t looking for political office or employment outside the municipality.

Marshall was the Liberal candidate in this year’s provincial election for the Simcoe North riding where Conservative Jill Dunlop won.

“Since he lost the election, it was obvious Marshall was looking for something more profitable. He tried to jump ship and now he has jumped ship,” said Leroux.

Mike Cadieux originally filed his nomination papers for mayor, but changed to councillor before the deadline.

He said he did so because he didn’t want Marshall to be elected again.

“When I found out he (Marshall) put his name forward, I withdrew my name. For people who didn’t like Gerry, I didn’t want to split the vote for Doug and myself.”

County councillors ‘stunned’ by Marshall’s abrupt resignation: ‘I would say this is very much out of the ordinary,’ says Penetanguishene Deputy Mayor Anita Dubeau

When news broke Wednesday night that Gerry Marshall was resigning his post as mayor of Penetanguishene as well as warden of Simcoe County to take a position as interim CAO of the Town of Wasaga Beach, residents weren’t the only ones surprised by the announcement.

“His commitment was to lead Simcoe County. I voted for him. I think many are stunned,” Adjala-Tosorontio Township Deputy Mayor Doug Little told BarrieToday when reached for comment Thursday.

Little and many other county councillors, including Marshall, are returning this week from the annual Association of Municipalities of Ontario (AMO) conference.

Little says he first heard the rumblings about Marshall stepping down while at the conference, but hoped it wasn’t true. “I’m very disappointed with the timing of this,” he said.

With Marshall announcing his resignation the day after councillors are returning from the conference, Little said he has concerns about how it makes the county look on the provincial stage.

“We attended AMO and met with new ministers and MPPs with Marshall as our leader,” Little said. “What does that tell the ministers about us?

“In my opinion, this decision was clearly made prior to AMO. I think this shows a lack of professionalism,” Little added. “There will be a ripple effect in many municipalities now.”

Part of that ripple effect is the state of town council in Penetanguishene.

Penetanguishene Deputy Mayor Anita Dubeau will be serving as interim mayor until the municipal election on Oct. 22.  “I will step up. It was quite a surprise that he chose to do that at this time,” she said.

Dubeau says she was made aware of the news about 24 hours before media releases were sent out Wednesday night. “I would say this is very much out of the ordinary,” said Dubeau. “I wish Marshall all the best in, what I think, will be a transition being a politician to being someone who is responsible to and takes direction from council.

“It will be an interesting transition.”

“I look forward to serving (Wasaga Beach) town council over the months ahead and providing effective guidance to our staff,” Marshall said in Wednesday night’s release. “I will work to see that council’s objectives are met and I am excited about working with staff to ensure the best municipal services are delivered for the residents of Wasaga Beach.”

When contacted for further comment on Thursday morning, Town of Wasaga Beach communications officer Michael Gennings indicated Marshall would be unavailable for media interviews until next week.

Essa Township Mayor Terry Dowdall will step up to take on Marshall’s responsibilities at the county level until the new warden is appointed in early December.

“I was surprised with the announcement, but as deputy warden, I am familiar with the role,” Dowdall said when reached by BarrieToday on Thursday for an interview.

“I am fortunate to have great county councillors to reach out to for support and assistance,” he added. “I certainly wish Gerry Marshall all the best in his new role.”

Simcoe County CAO Mark Aitken says that while there may be some discussions surrounding next steps after Marshall’s resignation, he doesn’t see any major problems going forward.

“County council may discuss some options in terms of more formal appointments for the remainder of the term of council at their next scheduled meeting in September, but it is anticipated at this time the deputy warden will continue to undertake the duties outlined,” said Aitken, adding that current sitting councillors will remain in office until the end of their term, Nov. 30, regardless of municipal election outcomes.

In Wasaga Beach, Mayor Brian Smith says he’s delighted by Marshall’s assistance in taking on the position. “Gerry brings to the job energy and knowledge that I know will serve our community well,” Smith said.

Marshall is replacing George Vadeboncoeur until a permanent CAO is named by the next council. Vadeboncoeur retired from the position in July after nearly 13 years with the municipality.

“I retired primarily for personal reasons… (there are some) health issues within my family. I felt I needed to spend more time with my family,” Vadeboncoeur said. “When I decided to retire, I wanted to put my name forward to run for council in Penetanguishene.

“I saw it as an extension of my community service.”

Wasaga Beach council engaged a consultant to assist with the selection process and considered three candidates, interviewing two. Acting on advice from the majority of the members of council, Vadeboncoeur authorized a six-month employment contract with Marshall, effective Aug. 23.

Gerry Marshall has resigned as the mayor of Penetanguishene after eight years in the position.

Marshall handed in his written resignation on Wednesday to accept a position as the Interim Chief Administrative Officer with the town of Wasaga Beach.

“I am delighted that Gerry will be assisting us,” Wasaga Beach mayor Brian Smith said. “Gerry brings to the job energy and knowledge that I know will serve our community well.”

“I look forward to serving town council over the months ahead and providing effective guidance to our staff,” Marshall said. “I will work to see that council’s objectives are met, and I am excited about working with staff to ensure the best municipal services are delivered for the residents of Wasaga Beach.”

Vadeboncoeur is retiring after 13 years.

Simcoe County councilors are appointed to their positions, so Marshall’s notice of resignation means he will also effectively resign his position as Simcoe County warden and as head of county council.

Deputy Mayor Anita Dubeau will take on the mayoral duties for Penetanguishene in the interim.

A news release from the town of Penetanguishene stated that Marshall’s name will remain on the ballot for the October 2018 Municipal Election for the office of Mayor.

Statement: Deputy Warden Terry Dowdall to assume the functions of the Warden

Given the County’s governance provisions, Deputy Warden Terry Dowdall will assume the functions commonly performed by the Warden in the interim, and County Council will continue to govern and provide direction as per the norm.

The County of Simcoe would like to thank Gerry Marshall for his time and contributions to Simcoe County Council, and wishes him all the best in his future endeavours.