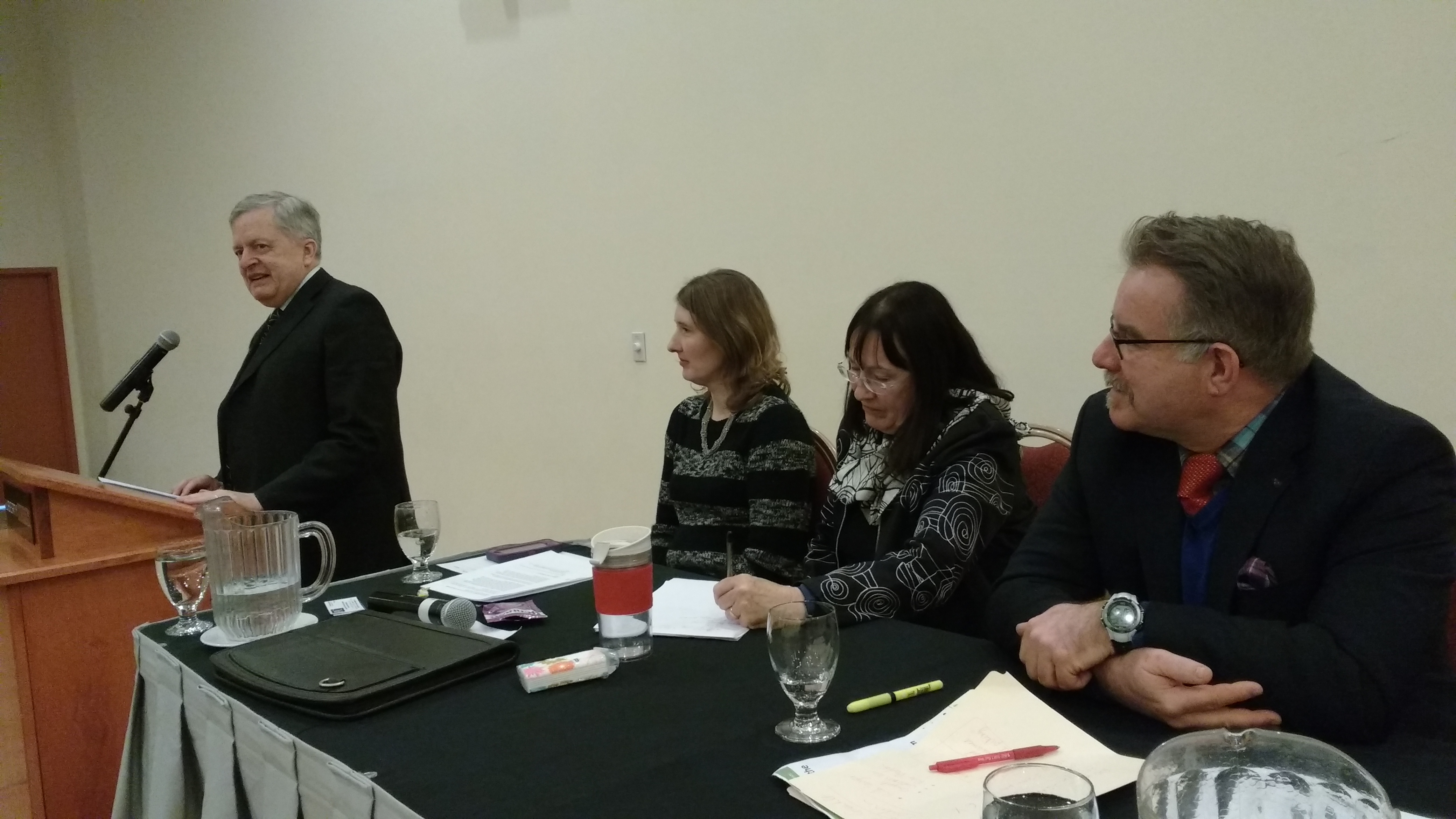 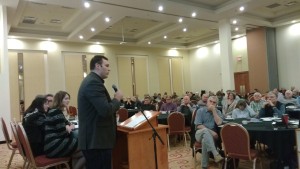 Protecting the natural environment makes communities more livable, safeguards our food and water for the future and reinvigorates local economies.

That message came from speakers encompassing a wide range of political viewpoints who addressed an enthusiastic audience at a Barrie meeting to support expansion of the Greenbelt into Simcoe County.

It was most succinctly delivered by Oakville Mayor Rob Burton, who has been called Canada’s greenest mayor. “Life is a pay-attention contest,” he told the crowd of 140 people. “The losses that we have suffered in my part of Ontario have been as much the result of being too busy to pay attention as they have been from any other cause.”

Burton has built his political career on a vision of a “Livable Oakville,” which has been about reining in growth (which keeps property tax under control because since 1998 development charges are not allowed to capture all infrastructure costs) and creating jobs (fighting at the Ontario Municipal Board to prevent developers from converting employment lands to residential).

Burton said Oakville council members check their political affiliations at the door. The first question on any proposal is whether it will make Oakville more livable. If it does, they move on to questions of feasibility and cost. But “if the answer is no, then the question is, why are we talking about it?”

Oakville’s unity of vision didn’t happen overnight, he said. Sixteen years ago, he and some friends talked a buddy into running for council. “It just takes one guy to shine the light, everyone will see the light,” they thought.

But after three years of losing all the votes 1-12, the friend said at least six more like-minded councilors were needed. “So he forced the rest of us to run.” They elected four, and over the next term, the votes on council were a consistent 4-9. “The next election seven of us won and all of a sudden there was enough light. The most recent election, there were 13.”

Burton, now in his third term as mayor, has seen his support go from 39 to 52 to 67 per cent. He tells supporters to choose their councilors as carefully as they do their mayor. “It would be the cruelest thing to elect me and a council that was going to fight against the livable vision and give in to the developers.”

Burton was one of three panelists to speak on the theme of Simcoe’s watershed moment – Protecting our water through the Greenbelt.

Lawyer David Donnelly noted that, according to land economists at the provincial Ministry of Municipal and Housing, Ontario has designated enough land to accommodate its projected employment and residential needs until 2041.

“There is no danger of running out of developable land,” Donnelly said. So the logical conclusion is that “we need to protect what we have in a natural cover state.”

The flip side of natural heritage protection is intensification and, prompting laughter by asking how many of those present travelled to Richmond Hill for their honeymoon, Donnelly cited Paris, London and Rome as examples of some of the benefits of high density. Toronto covers 630 km2, Paris, with almost the same population, covers 105. Intensification leads to more “intense” places, and doesn’t lower land values, he said.

Donnelly pointed to questions raised in a 2004 report by the consultant firm Neptis like, why are developers proposing such large-scale developments in Simcoe County? (The report does not specify but Everett and Midhurst spring to mind). Several reasons are proposed: because they hijack debate about how the county might grow; because of the weak capacity of local administration; because the private sector is usurping the role of the public sector.

Such problems are best addressed by growing the Greenbelt, Donnelly said, adding that the recent report by former Toronto mayor and federal cabinet minister David Crombie is a good guide to the way forward.

Expansion of urban boundaries should only be considered when Official Plans are updated, and stringent criteria should apply, Crombie recommends.

Donnelly noted that landowners who object to such restrictions on changes to land use designations want to take land with a rural agricultural designation, hire consultants, lobby municipal councils and change the value of the property from the purchase price of $500 or $1,000 an acre to tens of thousands of dollars an acre.

“In Vaughan a serviced acre of land approved for development is worth $700,000 or a million dollars,” he said. “What they’re really saying is, I want this multiplier opportunity on my land.”

Panelist Connie Spek, whose background includes membership of the Nottawasaga Valley Conservation Authority board, said the Greenbelt should not be considered a hurdle. “It can actually fire up the economy in more ways than we have imagined,” she said.

“Whether we build our recreation economy, we get more farmers back on the land, we get people who have jobs in our community and can commute less – but what that means is, we’re going to have to start looking at our environment in a different way. It can’t be piecemeal any more.”

Who would have thought that in Ontario we would have seen human deaths from drinking water, she said in reference to Walkerton, where seven people died and thousands became ill.

Source water protection was an elegant step in the right direction. “Now we just have to do the same for all the species we share this area with.”

Drawing on research for the South Georgian Bay Lake Simcoe source water protection plan, Spek demonstrated the extent of vulnerable aquifers across the county and the emerging concern of providing sufficient drinking water for the future. 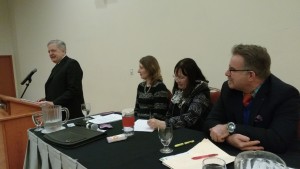 The question period showed that those in attendance were from all over Simcoe County and beyond. Tiny Township resident Dale Fawcett raised the issue of the lack of a conservation authority to protect the Severn Sound watershed (the Severn Sound Environmental Association is not a CA).

Burton noted that these are dangerous times for conservation authorities. “The review (by the provincial government) that’s going on is as likely to gut them as to make them better.”

He added that not only does it matter who is elected to council, it matters who the council appoints to the conservation authority board.

“It’s not a slam dunk, the environment is always going to be a contest. Selfish interests will always be attacking community interests… You’ve got to be vigilant.”

“We tend to carry on more about that ($8.5 million) than we do the bigger things,” he said, noting that it’s a basic rule of politics that the bigger the item, the shorter the debate.

Pam Fulford of the Friends of Strawberry Island (where a condo development is proposed) described how Ramara Township’s contract planner has ignored advice from the Lake Simcoe Region Conservation Authority and Simcoe County.

“Where is the enforcement? That is what I see is the problem, in that a small township like Ramara does not have the power or the money or the knowledge to implement the Lake Simcoe Protection Act.” Would extending the Greenbelt ensure enforcement of existing protections, she asked.

Aurora resident Frank Shaw, a farmer, biologist and volunteer with a number of conservation organizations, congratulated the organizers on the “best ever short course on bio-regional planning that I’ve ever heard in my 71 years… How do we take what we’ve learned to make sure the people who will make the decisions actually know what we are talking about?” 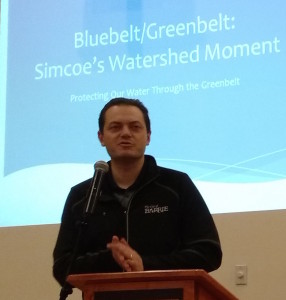