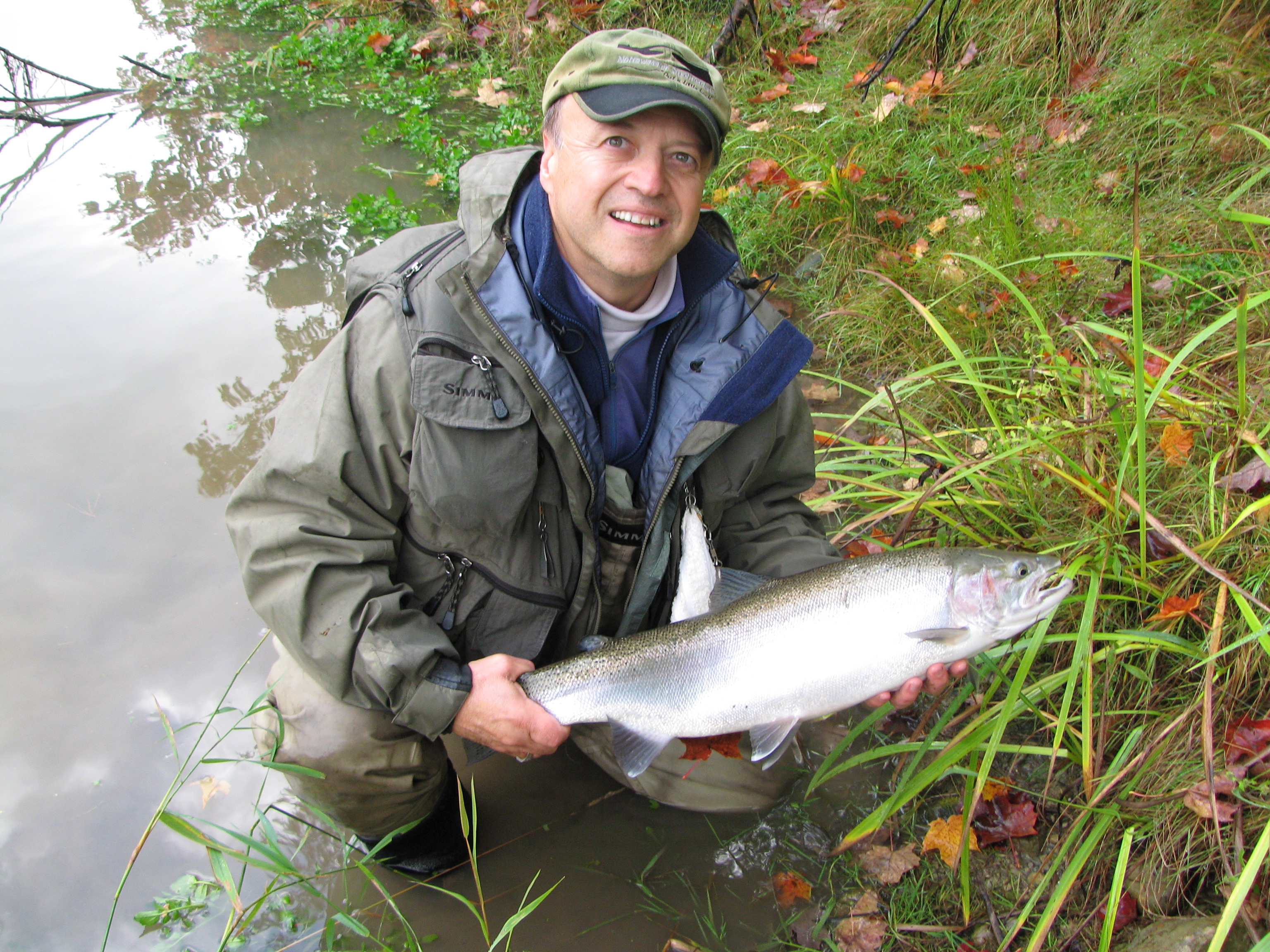 Gary Christie, president of the Nottawasaga Steelheaders, sent the following letter to Nottawasaga Valley Conservation Authority Chair and Wasaga Beach Councillor Nina Bifolchi regarding her response to Gary Cerantola on her website. Both Bifolchi and Cerantola are running for deputy mayor of Wasaga Beach:

I disagree, Nina, with your interpretation with regards to Mr. Cerantola. And I do not share with your excitement with regards to the NVCA’s Efficiency Audit. In fact, quite the reverse, I find it ominous in its “soft-interpretive” wording which by the way seems to be changing without board input and public comment.

The Nottawasaga Steelheaders over the past 20 years, in concert with the MNR and the very capable staff of the NVCA, have participated in numerous improvement, corrective and preservation projects to conserve the integrity of the watershed.

We are very concerned by the direction taken by many of the members of the board chaired by you. We find the recent audit by Tom Gazda and Associates to be flawed, representing a narrow two-dimensional perspective of the work of the NVCA. There is one key aspect of the audit that is missing and that is SCIENCE. Science does not lie. Science is what drives us to prepare and take appropriate measures. Mr. Gazda, who has no expertise in this field, uses numbers and comparisons of the NVCA with other conservation authorities, trying to draw a line from one to another. Unfortunately, it is not that simple. The resources that one conservation authority requires are different than another, based on intrinsic characteristics and requirements of the watersheds they are responsible for.

We find that you and the board are out of touch with the state of the Nottawasaga River watershed and the work done by staff. I would say that most of the board members really do not know what staff do and how important they are. Yet you are willing to look at incorporating part-time staff. Do you know how long it takes for people, even those simply planting trees, to really understand what they are doing? The audit’s recommendation is for the NVCA to be more “Solution Finding” with so-called customers. If the SCIENCE says no, it’s “NO”! The NVCA staff have an important responsibility and that is to protect. To “bend the rules” or be “a bit softer” is to be irresponsible and puts the NVCA at legal risk and the residents at a safety risk as well as compromising the stability of the watershed. To the watershed’s integrity, it would be akin to “death by a thousand cuts”. You in Wasaga Beach NEED a healthy Nottawasaga.

A very important report recently produced by the NVCA staff on the state of the Minesing Wetlands remains hidden in an agenda in May. It shows that the Wetlands, a very important part of the Nottawasaga River watershed, is desperately crying out for help. And yet as chair, you leave it on the shelf instead of featuring it prominently on the NVCA website and urgently soliciting public input on a plan of action. So I have my doubts when you say you support the NVCA and the watershed and the Wetlands. The report points out that 37% of critical deciduous forest cover has disappeared since 1955 due to various factors, including development and land use change. And that it is a known fact that wetlands (and the Minesing which is regarded by the RAMSAR Convention as internationally significant) are important in flood control. A major part of the Wasaga Beach area, including residences, is in the flood plain. Two factors are protecting your residents: a healthy Minesing Wetlands and a strong and uncompromised NVCA. Both are being attacked. It is not “if” but “when” the flood comes, and it will!

Recent alarming findings of a MacMaster University research program, still in progress, found in August of this year stretches of the Nottawasaga River with no dissolved oxygen or very low dissolved oxygen. This is a very unhealthy situation. What happens upstream goes downstream and will affect Nottawasaga Bay and Wasaga and other nearby beaches. Do you recall in the recent past the alarming number of dead birds and fish washed ashore on your beaches? The deaths were attributed to Clostridium Botulinum from high algae die-off in the bay. The algae bloom in a large part was due to nutrient load contribution from the Notty. You would agree with me that this is not good for your recreational economy and your Blue Flag rating. Keep cutting the NVCA’s ability to protect and you WILL see the effects.

Our organization and anglers are finding delayed runs of salmon and steelhead that are somehow being impacted by negative water conditions. These are an   important part of the ecosystem and a key recreational and economical component for Wasaga Beach and the watershed. Over the past 20 years we have noticed runs quickly leaving the lower sections where anglers frequented. Wasaga motels, once packed years ago, are empty in October and November.

Recent papers by the University of Waterloo are showing detrimental effects on fish below wastewater treatment plants, including “transgendered” fish. If you were in touch with the watershed and SCIENCE you would have asked these questions before you and the board directed the NVCA’s scientific staff to acquiesce to developers at a recent Ontario Municipal Board hearing on the Midhurst Secondary Plan, fearing legal costs. You as chair were not prepared to show leadership and go to bat for the Notty. What a shame.

So do you get my point? SCIENCE leads what you do on the Notty. Each watershed’s requirements are different and so are the resources needed to manage their respective CA’s. If it means hiring more qualified staff, you do the responsible thing. If resources are insufficient, you as chair fight for the watershed, and take political action to address the shortcomings of a provincial government’s funding model that does not allow for qualified and experienced staff to carry out mandated responsibilities. It appears you and 16 of the 30 board members are in a rush to push through Mr Gazda’s recommendations and you fear that additional input from the public on the recommendations would disrupt your agenda. We must all recognize that we need the knowledge and expertise of others before making such important decisions. So I can understand why Mr. Cerantola seeks greater transparency. Your ‘explanation’ for the many in-camera sessions is not an explanation, it is your position. Other members of the board have stated that all but a couple of the recommendations could and should be discussed in pubic.

The public is getting tired and frustrated by politicians who are not transparent. By your actions over the past board meetings as chair, you have created an unsettled atmosphere that is counter-productive and you must accept responsibility for that.

To this point you have let two important staff members go from the NVCA. Both of these people were key building blocks in the NVCA’s growth and history of accomplishment over the past 20 years. One was a senior planner and the other was the CAO with a great deal of science and management experience and knowledge. I can’t help but feel that these people were obstacles to an ulterior agenda.  But you are not able to say why, due to legal restrictions. Again, more secrecy.

Failing to welcome NGO (non-governmental organization) input to board decisions is short-sighted. Other CA’s have involved NGO’s and it’s long overdue for the NVCA.

In conclusion, transparency is an issue. The matter has been raised by the Nottawasaga Steelheaders as well as other groups. It is a pity that you consider a difference of opinion or the proposal of an alternative position to be a “smear campaign.” It is not. We are participating in this process because we know the river and we know this is a critical time for ensuring that it survives as a functioning ecosystem. Deputy mayoral candidate Gary Cerantola has taken note of this debate and brought the issues forward as is appropriate at election time. Nothing in what he has said constitutes a smear campaign.

What we would like is for you to go head to head with Gary in a debate on the future of the Nottawasaga. That way you could each present your positions and rebut what you disagree with – and we could be the judge of who has the best interests of the Notty at heart. The Nottawasaga Steelheaders would be happy to sponsor such a debate.